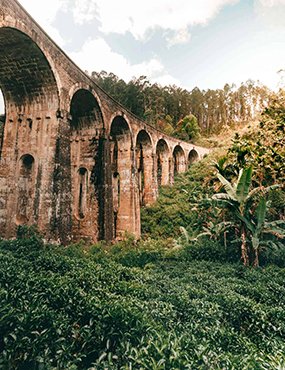 Ella is a small town in the Badulla District of Uva Province, Sri Lanka governed by an Urban Council. It is approximately 200 kilometres east of Colombo and is situated at an elevation of 1,041 metres above sea level. The area has a rich bio-diversity, dense with numerous varieties of flora and fauna.

Namunukula, literally "Nine Peaks" in Sinhala language, is the name of a mountain range in Sri Lanka's province of Uva. Its main peak is 2,036 metres high. The nearby town is also sometimes called Namunukula Town. During the Ming treasure voyages of the 15th century, the Chinese fleet led by Admiral Zheng He made use of this geographical feature in their navigation to Sri Lanka, as the mountain is the first visible landmark of Sri Lanka after departing from Sumatra. 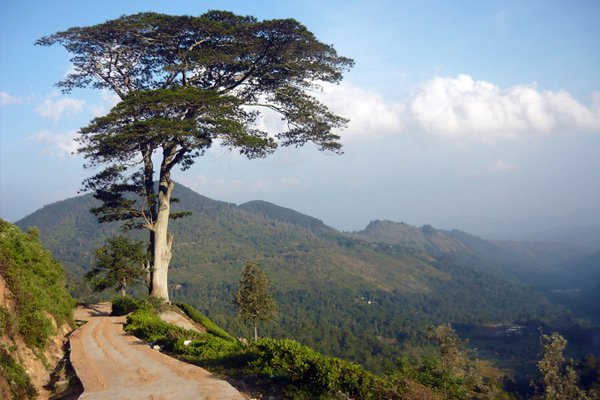 Kotalawala Walawwa is a historic Walawwa building situated in Hindagoda, Badulla, Sri Lanka. The building is located on the Badulla - Passara main road, approximately 1 km away from the Badulla town. It was the residence of former Muhandiram Don Carolis Kotalawala. The Walawwa has been formally recognised by the Government as an archaeological protected monument in Sri Lanka. The designation was declared on 22 November 2002 under the government Gazette number 1264. 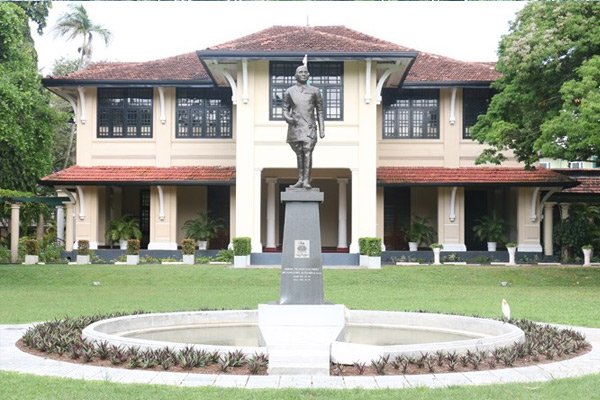 The Bogoda Wooden Bridge was built in the 16th century during the Dambadeniya era. This is said to be the oldest surviving wooden bridge in Sri Lanka. The bridge is situated at 7 kilometres west of Badulla. All parts of this bridge were constructed from wood, including the use of wooden nails as fixing material. The roof tiles show the influence of Kingdom of Kandy. The bridge was built across the Gallanda Oya, which linked Badulla and Kandy on an ancient route. 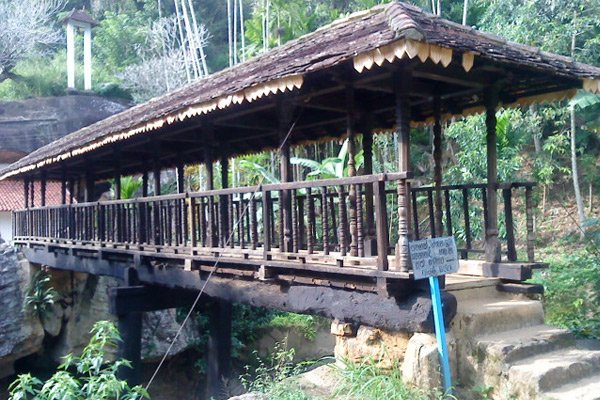 The Old Welekade Market is a historic colonial building in Badulla, Sri Lanka. The site belonged to the Badulla Divisional Secretariat division and is located near the Badulla Hospital, on the Badulla-Bandarawela road. The history about the construction of Welekade market building is unclear, with many people believing that it was erected by the Dutch as a kind of castle or fortress. According to more reliable sources the building was constructed by the British in 1889, as the first public building in the Uva province. Due to its historical importance, the Welekade building has been formally recognised by the government as an archaeological protected monument. The designation was declared on 6 June 2008 under the government Gazette number 1553. 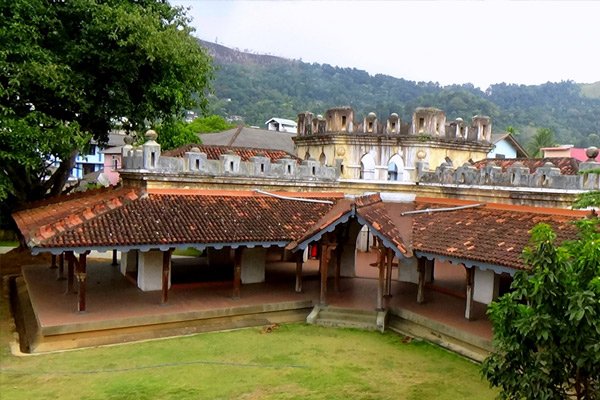 Dunhinda Falls is a waterfall located about 5 kilometres from Badulla in the lower central hills of Sri Lanka. The waterfalls are purported to be one of the country’s most beautiful waterfalls. The waterfall, which is 64 metres high, gets its name from the smoky dew drops spray, which surrounds the area at the foot of the waterfall. It's also known as bridal fall, as the shape of the water falling is similar to a bridal veil. The waterfall is created by the Badulu Oya which flows through Badulla. 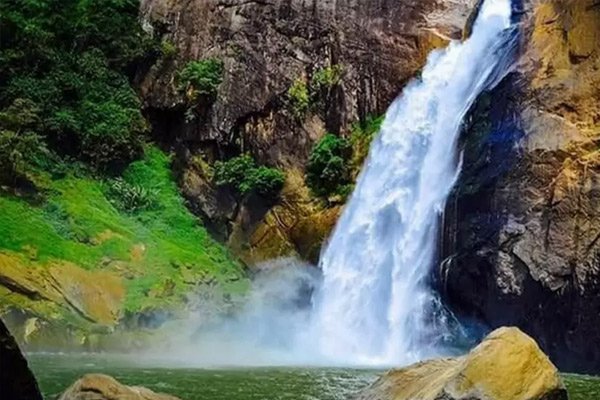 Adisham Hall, or Adisham Bungalow is a country house near Haputale, in the Badulla District, Sri Lanka. At present, it houses the Adisham monastery of Saint Benedict. It has a relic of St. Sylvester at the chapel. The house was built in 1931 by an English aristocrat and planter Sir Thomas Villiers, former Chairman of George Steuart Co, a trading and estate agency based in Colombo. Sir Thomas was a grandson of Lord John Russell and descendant of the Dukes of Bedford. Named after Adisham, it was designed by R. Booth and F. Webster in Tudor and Jacobean style, on 10 acres of land. Adisham Hall played host to many prominent personalities of the colony until the retirement of Sir Thomas, after which it was sold to Sedawatte Mills owned by Vimala Wijewardene in 1949. In 1961 it was purchased by the Roman Catholic Church and was subsequently converted to a monastery. The house is well preserved along with its period fittings and furniture, and is open to visitors. 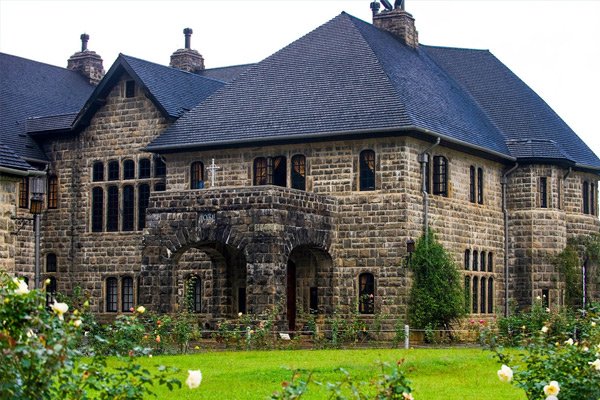 Lipton’s Seat is a high observation point in the hills of Poonagala. Located on the top of the town’s namesake, Poonagala Hill, it is also near the Dambatenne Tea Factory. Lipton’s Seat is so named because the famed Scottish baron and tea planter Sir Thomas Lipton us ed it as the seat to survey his empire in a time long gone but not forgotten. 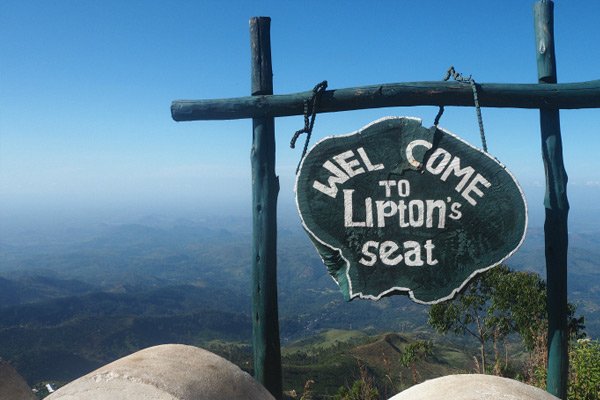 Little Adam’s Peak is the miniature version of the famous pilgrimage route near Hatton. It is probably the easiest and most accessible hike in Ella. The beginning of the trail starts near the entrance to 98 Acres Hotel – follow the road to the right of the reception area and keep walking past the spa until you reach this sign. The hike should take no longer than 45 minutes to an hour each way, but you’ll still need proper walking shoes, a hat, sunglasses, sunscreen and plenty of water. Head there early in the morning or in the late afternoon for stunning 360-degree panoramic views. 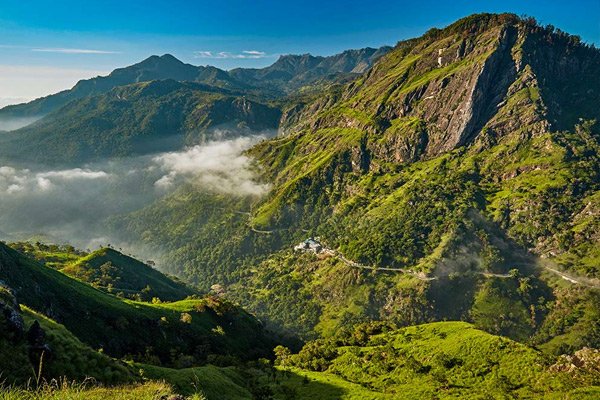 Dhowa Rock Temple is a protected heritage site in Sri Lanka, situated in the central mountains of the Uva province. Dhowa is a small, ancient village situated on the Badulla - Bandarawela main road. This temple is situated 210 km east of Colombo and 120 km south of Kandy. The Dhowa rock temple is famous for its large unfinished Buddha image, carved into the rock face, which is considered an example of Mahayana sculpture. The temple dates back over 2000 years. The area gained the name Dhowa as it is located within a ring of mountains, with a river which flows across the plateau. 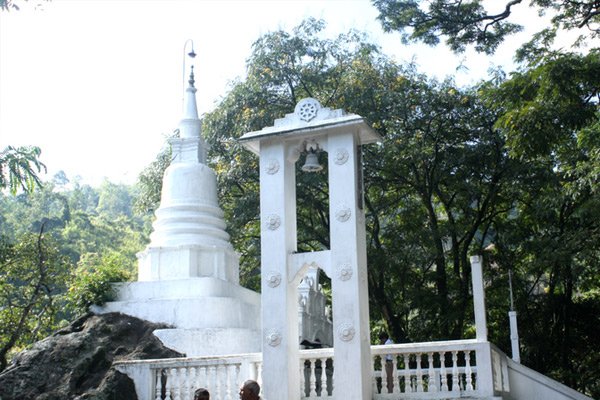 Popularly known as Ravana Alla is a popular sightseeing attraction in Sri Lanka. It currently ranks as one of the widest falls in the country. This waterfall measures approximately 25 m (82 ft) in height and cascades from an oval-shaped concave rock outcrop. During the local wet season, the waterfall turns into what is said to resemble an areca flower with withering petals. But this is not the case in the dry season, where the flow of water reduces dramatically. The falls form part of the Ravana Ella Wildlife Sanctuary, and is located 6 km (3.7 mi) away from the local railway station at Ella. 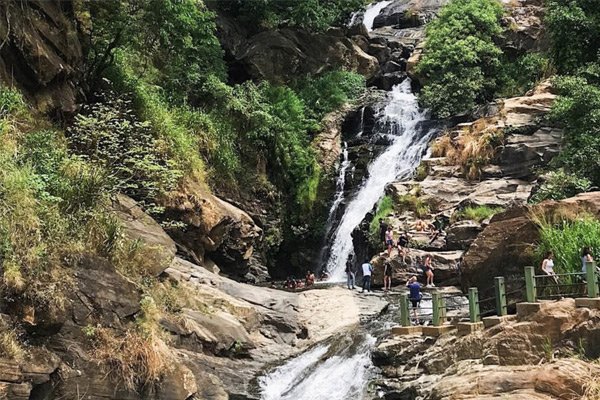 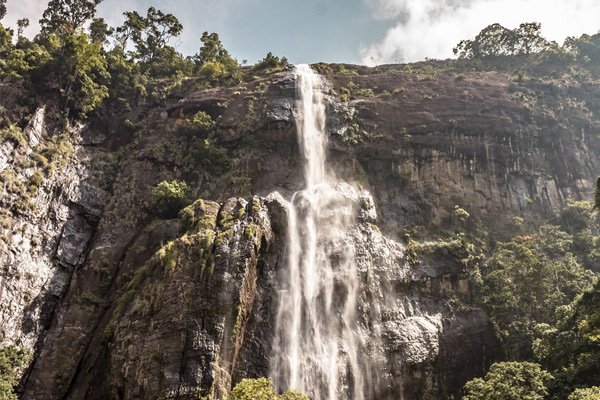 The Nine Arch Bridge also called the Bridge in the Sky, is a viaduct bridge in Sri Lanka. It is one of the best examples of colonial-era railway construction in the country. The construction of the bridge is generally attributed to a local Ceylonese builder, P. K. Appuhami, in consultation with British engineers. The chief designer and project manager of the 'upcountry railway line of Ceylon' project was D. J. Wimalasurendra, a distinguished Ceylonese engineer and inventor. The designer of the viaduct was Harold Cuthbert Marwood of Railway Construction Department of Ceylon Government Railway. The 1923 report titled "Construction of a Concrete Railway Viaduct in Ceylon" published by the Engineering Association of Ceylon has details of all the records including the plans and drawings. It is located in Demodara, between Ella and Demodara railway stations. The surrounding area has seen a steady increase of tourism due to the bridge's architectural ingenuity and the profuse greenery in the nearby hillsides. 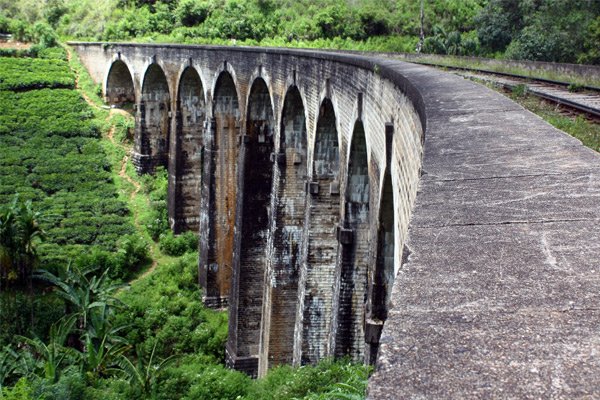