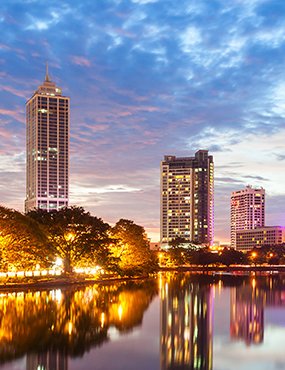 The largest city and commercial capital of Sri Lanka is Colombo which is located in the western province adjacent to Sri Jayewardenepura Kotte (the capital city of Sri Lanka ) Colombo is a vibrant city with a mixture of modern life , colonial buildings and ruins.

Due to its very large harbor and its position along the East-West sea trade routes Colombo was very popular among ancient traders 2000 years ago.

The name "Colombo", first introduced by the Portuguese in 1505, is believed to be derived from the classical Sinhalese name Kolon thota, meaning "port on the river Kelani". It has also been suggested that the name may be derived from the Sinhalese name Kola-amba-thota which means "Harbor with leafy mango trees". However, it is also possible that the Portuguese named the city after Christopher Columbus. 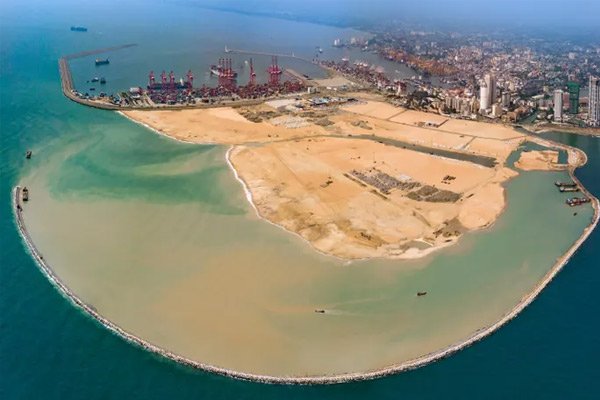 The Sri Lankan Parliament Complex is a public building and landmark that houses the Parliament of Sri Lanka. Situated in Sri Jayawardenepura Kotte, the administrative capital, it is built on an island, surrounded by the Diyawanna Oya. It was designed by Deshamanya Geoffrey Bawa. 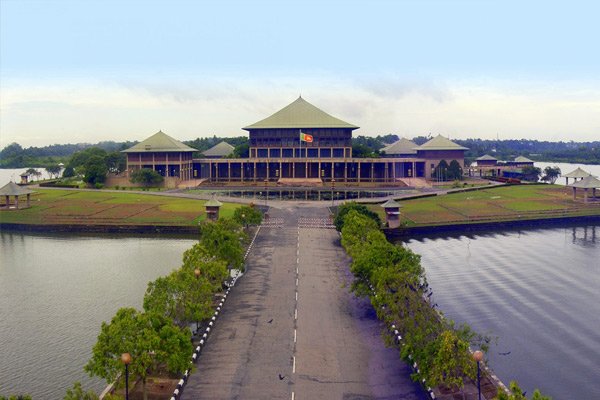 The Old Parliament Building, is the building that houses the Presidential Secretariat of Sri Lanka. Situated in the Colombo fort area facing the sea, it is in close proximity to the President's House, Colombo and adjacent to the General Treasury Building. The building housed the island's legislature for 53 years until the new parliamentary complex was opened at Sri Jayawardenepura in 1983. 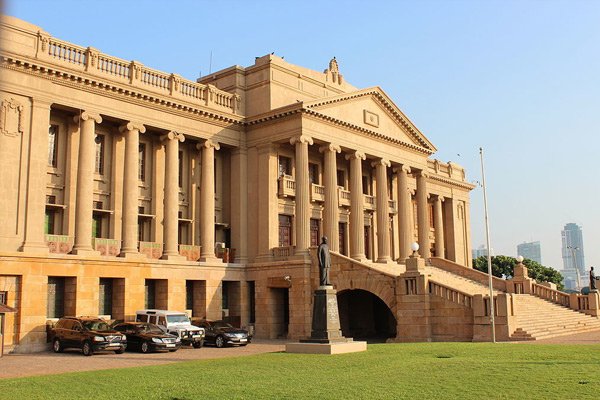 St. Anthony's Shrine is a Roman Catholic church in the Archdiocese of Colombo in Sri Lanka. The church is located at Kochchikade, Kotahena, Colombo 13, and is dedicated to Saint Anthony of Padua. The church is designated a national shrine and minor basilica. A tiny piece of St. Anthony's tongue is preserved in a special reliquary, which is located in a glass case together with a statue of the saint, at the entrance to the church. 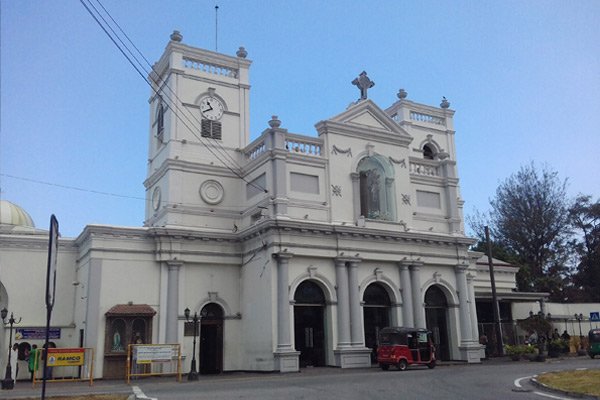 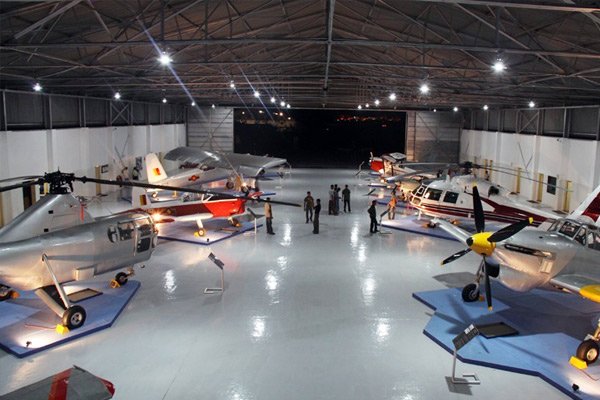 Diyawanna Lake or Parliament Lake, is one of the lakes within Sri Jayawardenepura Kotte, Sri Lanka. It is quite popular as the Sri Lankan Parliament Building was built on an artificial island at the center of the lake. The Diyatha Uyana park is also located on the banks of this lake. This lake was created in 1979 and has eight islands 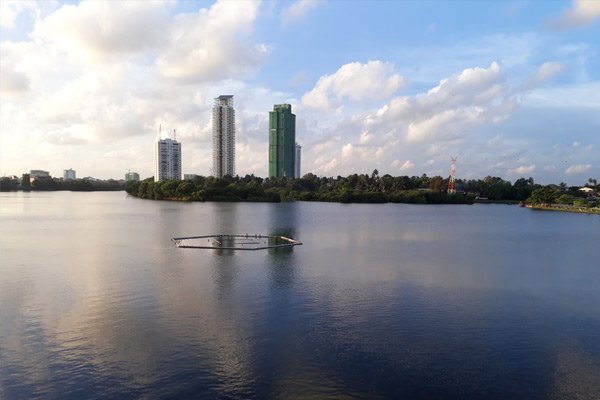 Colombo Lighthouse is a Lighthouse in Colombo in Sri Lanka and it is operated and maintained by the Sri Lanka Ports Authority. It is located at Galbokka Point south of the Port of Colombo on the waterfront along the marine drive, in Colombo fort. 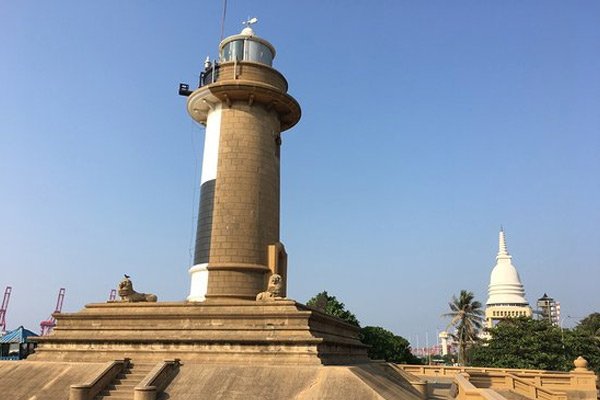 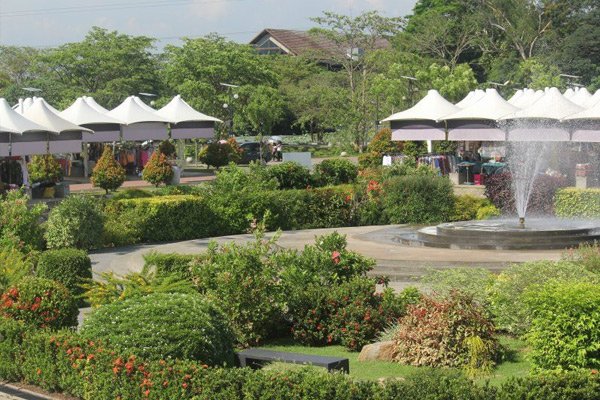 The Kelaniya Raja Maha Vihara or Kelaniya Temple is a Buddhist temple in Kelaniya, Sri Lanka. It is located 11 km north-east of Colombo. The current chief incumbent is Venerable Professor Kollupitiye Mahinda Sangharakkhitha Thera. The temple has often been associated with the rise and fall of Ceylon / Sri Lanka, with the popular saying that as the Kelaniya temple rose, Sri Lanka rose and as it fell, the country and its administration fell. It has thus had a deep association with the political powers of the country. It is also infamous for Mapitigama Buddharakkitha, the chief conspirator of the 1959 assassination of Ceylon's fourth Prime Minister S. W. R. D. Bandaranaike. Buddharakkitha was the chief incumbent of the Kelaniya Raja Maha Vihara from 1947 to 1959. 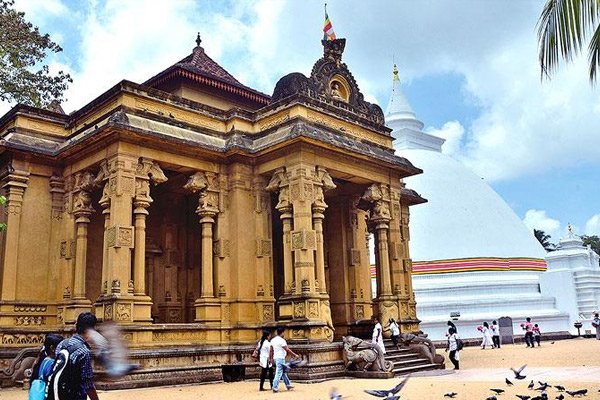 The Royal Colombo Golf Club is the oldest golf club in Sri Lanka. Established in 1880, it is located in the capital city of Colombo at The Ridgeway Links also known as the Anderson Golf Course. It is home to the Sri Lanka Golf Union, the governing body of Golf in Sri Lanka and maintains links with the Royal and Ancient Golf Club of St. Andrews in Scotland. 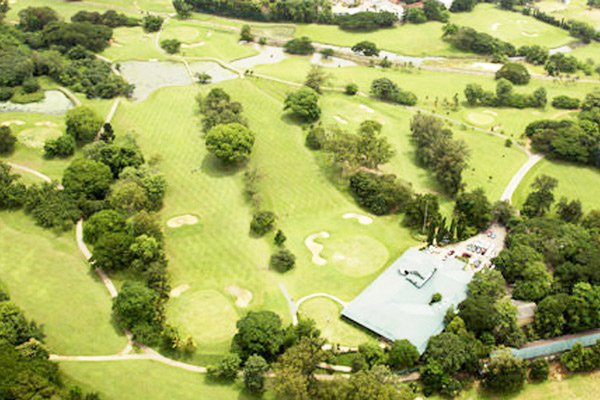 Lotus Tower, also referred to as Colombo Lotus Tower, is a tower of 356 m, located in Colombo, Sri Lanka. It also reflects the symbolic landmark of Sri Lanka. As of 16 September 2019, the tower is currently the tallest self-supported structure in South Asia. It is also the second tallest structure in South Asia after the guy-wire-supported INS Kattabomman in India. The tower is also the 11th tallest completed tower in Asia and it is also the 19th tallest tower in the world. It was first proposed to be built in the suburb of Peliyagoda but later the Government of Sri Lanka decided to shift the location. The lotus-shaped tower will be used for communication, observation and other leisure facilities, with construction costing $104.3 million, funded by EXIM Bank of People's Republic of China. It is visible throughout Colombo, its suburbs and most major highways radiating from and around the city. The tower was opened to the public on the 16 September 2019 by President Maithripala Sirisena, seven years after the project commenced. 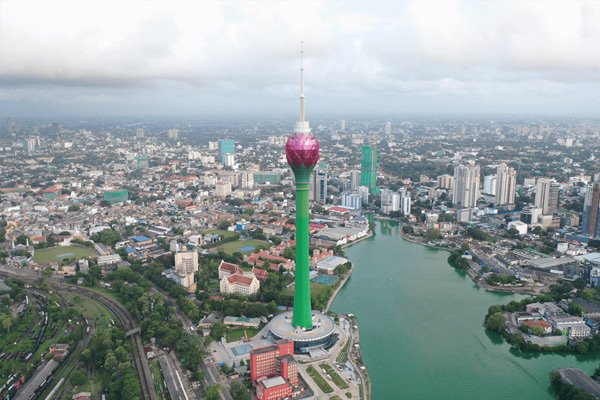 Beira Lake is a lake in the center of the city of Colombo in Sri Lanka. The lake is surrounded by many large businesses in the city. It initially occupied approximately 1.65 km² of land 100 years ago and this has since been reduced to 0.65 km² today due to various reasons. During the colonial era of the Portuguese, Dutch and the English the lake was used for a wide variety of purposes. It still retains its Portuguese name. It is connected to many intricate canals which provided an easy way of transporting goods within the city and suburban cities. 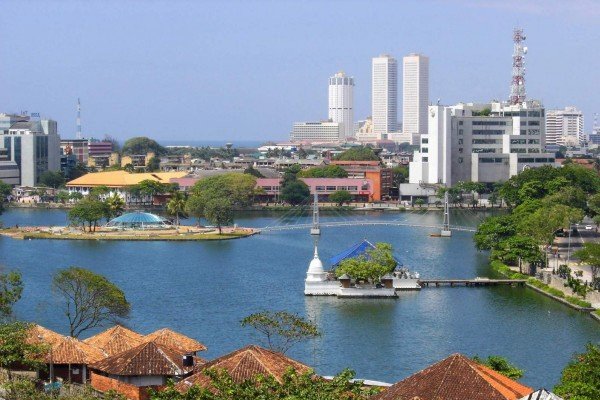 Independence Memorial Hall is a national monument in Sri Lanka built for commemoration of the independence of Sri Lanka from the British rule with the restoration of full governing responsibility to a Ceylonese-elected legislature on February 4, 1948. It is located in Independence Square in the Cinnamon Gardens, Colombo. It also houses the Independence Memorial Museum. The monument was built at the location where the formal ceremony marking the start of self-rule, with the opening of the first parliament by Prince Henry, Duke of Gloucester occurred at a special podium February 4, 1948. Located at the head of the monument is the statue of the first prime minister of the country Rt. Hon. Don Stephen Senanayake "The Father of the Nation". Most of the annual National Independence Day celebrations have been held here. Apart from a monument it served as the ceremonial assembly hall for the Senate of Ceylon and the House of Representatives of Ceylon until the parliament was moved to the new parliament complex. Currently it is the venue for religious events and annual national day celebrations 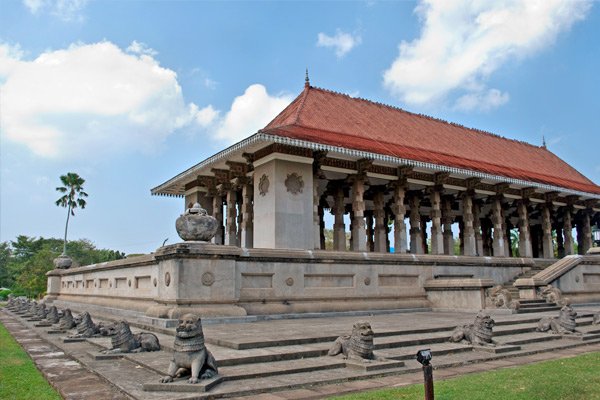 Seema Malaka is a Buddhist temple in Colombo, Sri Lanka. The temple is mainly used for meditation and rest, rather than for worship. Situated in the Beira Lake, the temple was originally constructed in the late 19th century. Seema Malaka is a part of the Gangaramaya Temple and is situated few hundred meters to its east 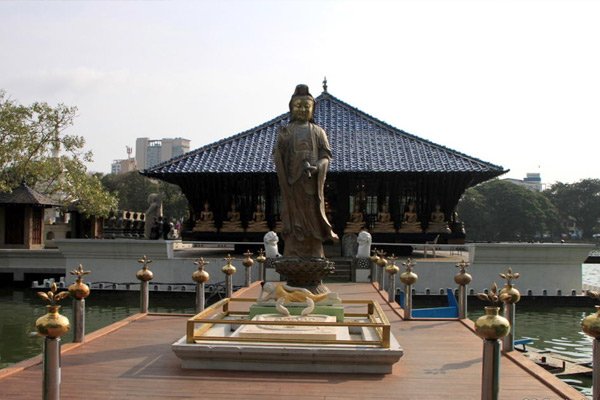 Viharamahadevi Park is a public park located in Cinnamon Gardens, Colombo, situated in front of the colonial-era Town Hall in Sri Lanka. It was built by the British colonial administration and is the oldest and largest park of Colombo. The park was originally named "Victoria Park" after Queen Victoria but was renamed after Queen Viharamahadevi, the mother of King Dutugamunu following independence. During World War II it was occupied by the British Army with Australian 17th Brigade based at Victoria Park. After the war the park was restored and open to the public in 1951. There used to be a cricket ground in the park, which was used for first-class cricket between 1927 and 1995. Ceylon played against a touring English team there in 1927 and against an Australian team in 1935. The park features include a huge Buddha statue which replaced the statue of Queen Victoria which originally stood there, and a series of water fountains. It also includes a mini zoo, a children's play area and a BAC Jet Provost. There are Muscovy ducks in the park. They swim in the artificial lake and walk on the grass beside it 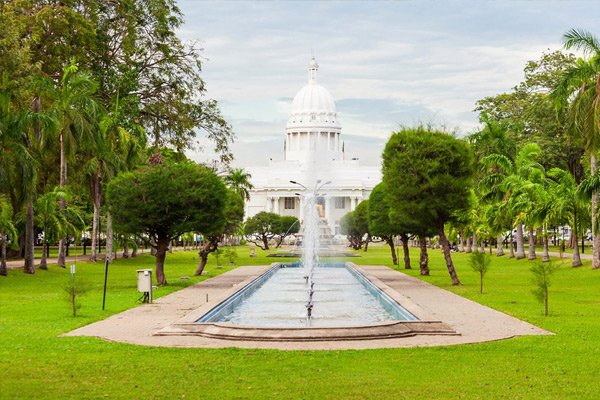 The Dehiwala National Zoo, which has a remarkable collection of exotic and indigenous fauna, is one of the oldest Zoos in Asia. The Zoo in Sri Lanka is widely known as Colombo Zoo all over the world.

Currently, Dehiwala Zoo houses 72 species of Mammals, 65 species of Birds, 31 species of Reptiles, 89 species of Fish, 03 families of Amphibians and 30 species of Butterflies etc. The total number of animals varies from 2500-3000 due to breeding and free living colonies of birds. Dehiwala Zoo has become famous among the visitors not only for collection of local and exotic animals but also for landscaping with lush greeneries. The Zoo supports and promotes conservation by breeding certain rare and endangered species through proper animal welfare. 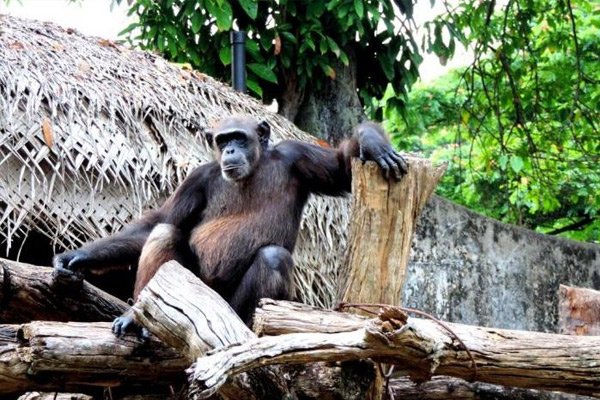 It is the first and only planetarium in the country and maintained as an institute under the Ministry of Science, Technology and Research. The Planetarium was established on 1 February 1965 by the State Engineering Corporation as a special feature for the Ceylon industrial exhibition held in Colombo same year. 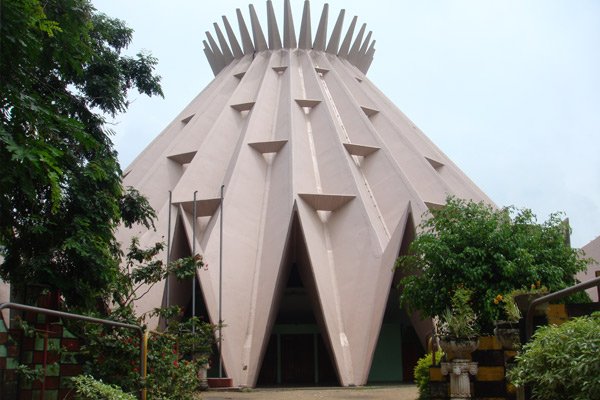 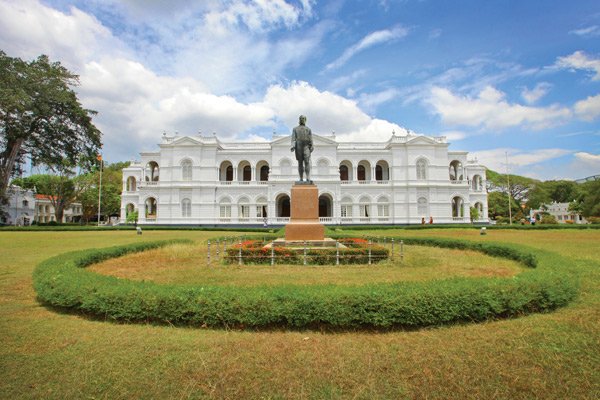 Pettah is a neighbourhood in Colombo, Sri Lanka located east of the City centre Fort. The Pettah neighborhood is famous for the Pettah Market, a series of open air bazaars and markets. It is one of Sri Lanka's busiest commercial areas, where a huge number of wholesale and retail shops, buildings, commercial institutions and other organisations are located.

The main market segment is designed like a gigantic crossword puzzle, where one may traverse through the entire markets from dawn till dusk, but not completely cover every part of it.

Pettah is derived from Tamil: Pettai, an Anglo-Indian word used to indicate a suburb outside a fort. Today, the Sinhala phrase, pita-kotuwa (outside the fort) conveniently describes the same place. 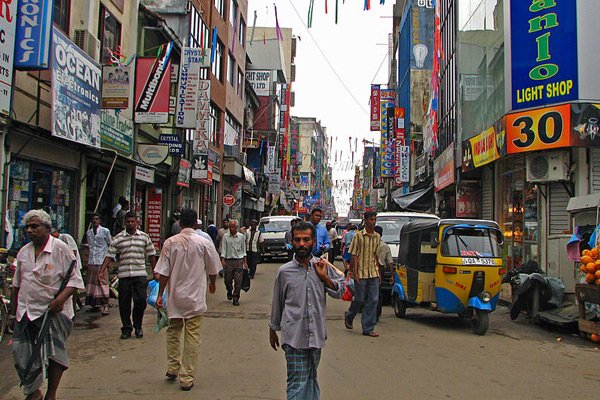 Galle Face Green is a favorite place for families, children, lovers and picnickers. While the hot sun makes carrying around an umbrella a must and the crows are a nuisance, it is still a beautiful place to relax, enjoy the beach and have meals. There is enough space to walk around, sit and even fly kites. During the kite season, the skies over Galle Face Green are hidden behind the colorful kites that bring joy to the young and old. Those who enjoy people watching will be able to do a lot of observing at Galle Face Green, as it attracts people of various cultures, ethnicities and ages. 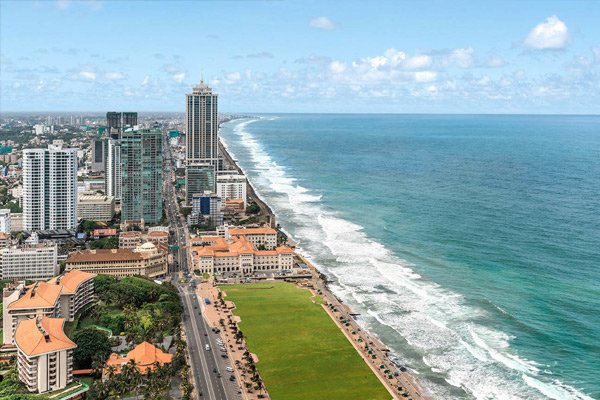 Delve into 19th century Gangaramaya Temple, one of the most significant places of worship in Colombo, featuring a mix of modern architecture and cultural essence, swirling with orange-robed monks revering radiant Buddha statues. 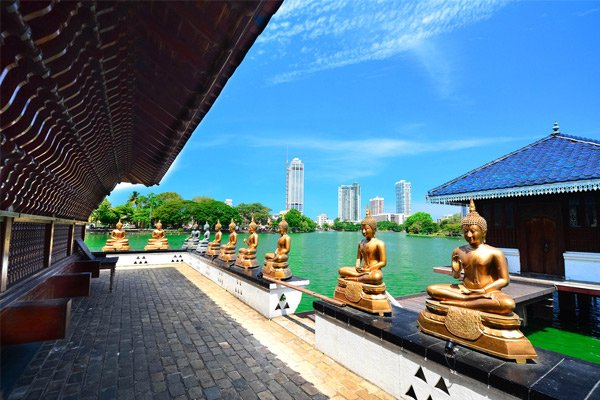