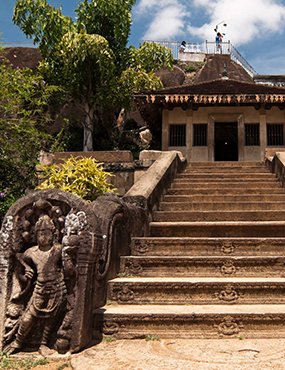 Anuradhapura is a major city in Sri Lanka. It is the capital city of North Central Province, Sri Lanka and the capital of Anuradhapura District. Anuradhapura is one of the ancient capitals of Sri Lanka, famous for its well-preserved ruins of an ancient Sinhala civilization.Although the weather in Anuradhapura remains the same throughout the year, the best time to visit Anuradhapura has been recorded to be April and September. During these months, the city receives less rainfall and it is a dry season which makes it perfect for sightseeing. Colombo to Anuradhapura distance 200.6km

This huge pond is thought to have been an ancient storage tank. It is so big you could fit over 6 Olympic size swimming pools in it. To this day the underground channels still keep the pond topped up. Those ancient builders knew a thing or two about engineering. 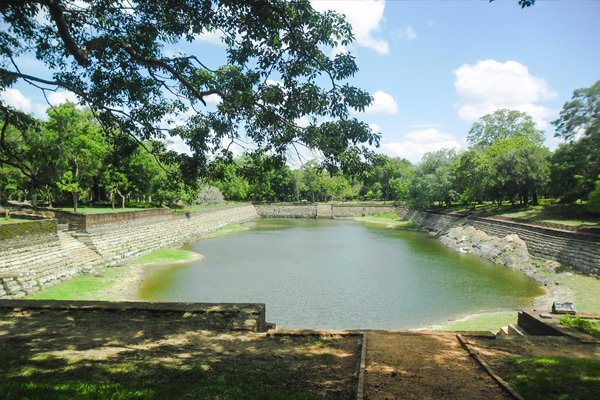 Nuwara wewa is the largest of the three man made reservoirs in Anuradhapura the other two are Basawakkulama (abaya wewa) and the Tissa wewa. Nuwara wewa is believed to be built by king Vattagamini Abaya popularly known as king Valagamba is the first century BC 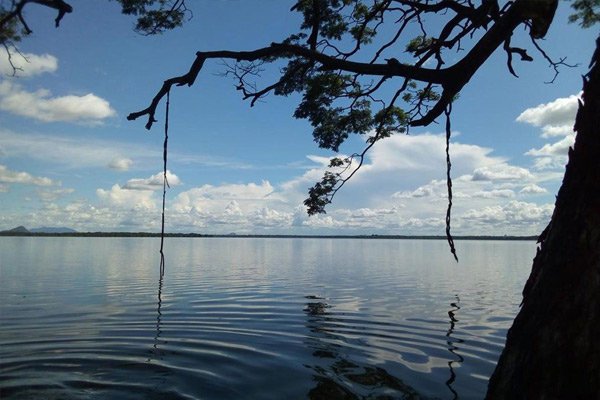 Ranmasu Uyana is a park in Sri Lanka containing the ancient Magul Uyana. It is situated close to Isurumuni Vihara and Tissa Wewa in the ancient sacred city of Anuradhapura, Sri Lanka. It sits on approximately 40 acres, and is a noted example of Sri Lankan garden architecture of the pre-Christian era 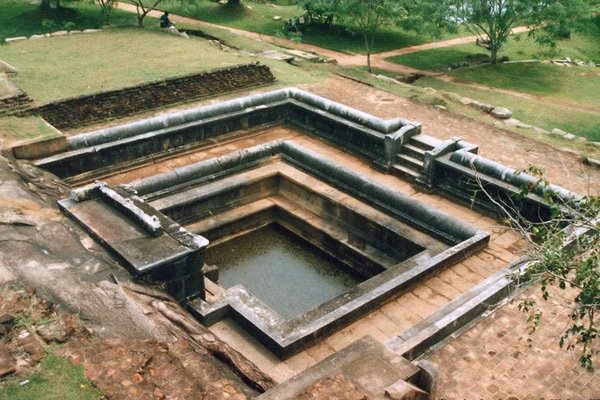 The Samadhi Buddha is a famous statue situated at Mahamevnāwa Park in Anuradhapura, Sri Lanka. The Buddha is depicted in the position of the Dhyana Mudra, the posture of meditation associated with his first Enlightenment. This statue is 7 feet 3 inches in height and carved from dolomite marble. It was found in 1886 at Mahamevnāwa Park. It is similar to the Toluvila statue from the same period. It is similar to Gupta period Buddha images, it is believed that originally the image was gilded and had inlaid eyes made of precious gems. It is likely that it was one of the four statues around a sacred Bodhi tree shrine. This is the only one that has survived largely intact. Whether the Buddha's Enlightenment was the experience technically called samadhi, or some other phenomenon, may depend upon the philosophical allegiance of the believer. In the Dhyana Mudra the Buddha sits cross-legged with his upturned palms placed one over the other on his lap. This position is universally known throughout the Buddhist world, and this statue is therefore one of the most typical pieces of Buddhist sculpture. 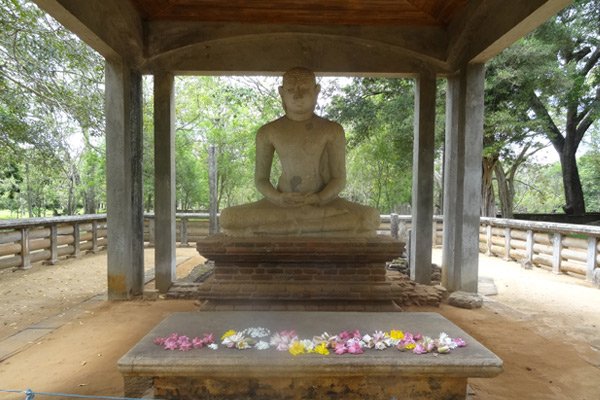 Anuradhapura Archaeological Museum is one of the archaeological museums of Sri Lanka. It is situated in the old kachcheri building, between the Brazon palace and Ruwanwelisaya. The museum was established in 1947 under the prime effort of Dr. Senarath Paranavithana. Anuradhapura Archaeological Museum is one of the oldest museum in the Cultural Triangle area and it has been proposed to name as the National Museum of the Department of Archaeology of Sri Lanka. The museum is used to exhibit antiquities found from various regions of Sri Lanka. Such as Buddha statues, inscriptions, drawings, puppets, coins, jewelleries, Beads and other miscellaneous things. Among these antiquities there is a model of the Thuparamaya Vatadage and a relic chamber found at Mihintale Kantaka Chetiya Dagoba 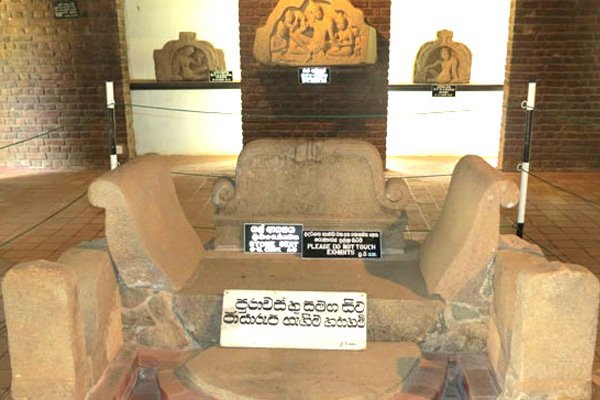 Lovamahapaya is a building situated between Ruwanweliseya and Sri Mahabodiya in the ancient city of Anuradhapura, Sri Lanka. It is also known as the Brazen Palace or Lohaprasadaya because the roof was covered with bronze tiles. In ancient times, the building included the refectory and the uposathagara. There was also a Simamalake where the Sangha assembled on Poya days to recite the sutra of the confessional. The famous Lohaprasada built by King Dutugemunu, described as an edifice of nine stories, was a building of this class. One side of the building was 400 ft in length. There are 40 rows, each row consisting of 40 stone pillars, for a total of 1600 pillars. It is said that Lovamahapaya was adorned with corals and precious stones. It is believed that it took six years for the construction of the building and the plan was brought from the heavens. The building was completely destroyed during the reign of King Saddhatissa. Whilst the Jetavanaramaya, Abhayagiriya and Ruwanwelisaya were taller structures, the Lovamahapaya remained the tallest building of the island for over a millennium between 155BC and 993AD 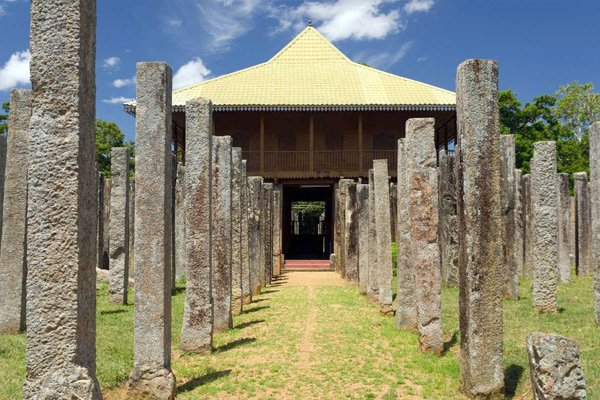 Sandakada pahana, also known as Moon-stone, is a unique feature of the Sinhalese architecture of ancient Sri Lanka. It is an elaborately carved semi-circular stone slab, usually placed at the bottom of staircases and entrances. First seen in the latter stage of the Anuradhapura period, the sandakada pahana evolved through the Polonnaruwa, Gampola and Kandy period. According to historians, the sandakada pahana symbolises the cycle of Saṃsāra in Buddhism. 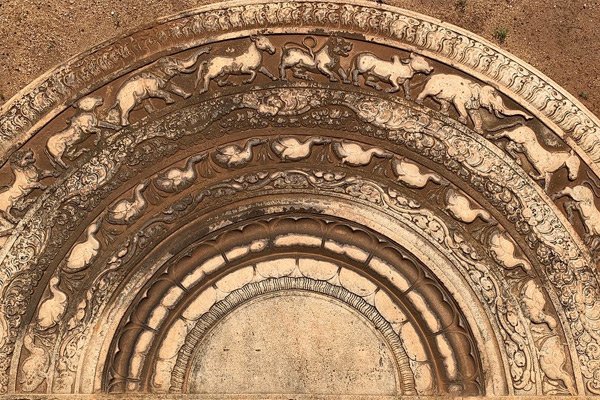 The Jetavanaramaya is a stupa, or Buddhist reliquary monument, located in the ruins of Jetavana monastery in the world heritage city of Anuradhapura, Sri Lanka. At 122 metres it was the world's tallest stupa and the third tallest structure in the world when it was built by King Mahasena of Anuradhapura. He initiated the construction of the stupa following the destruction of the Mahavihara. His son Maghavanna I completed the construction of the stupa. A part of a sash or belt tied by the Buddha is believed to be the relic that is enshrined here. The structure is significant in the island's history as it represents the tensions within the Theravada and Mahayana sects of Buddhism; it is also significant in recorded history as one of the tallest structures in the ancient world; and the tallest non-pyramidal building; the height of the stupa was 122 metres, making it the tallest stupa in the ancient world. With the destruction and abandonment of Anuradhapura kingdom in the 11th century, the stupa with others was covered by jungle. King Parakramabahu in 12th century tried to renovate this stupa and it was rebuilt to the current height, a reduction from the original height 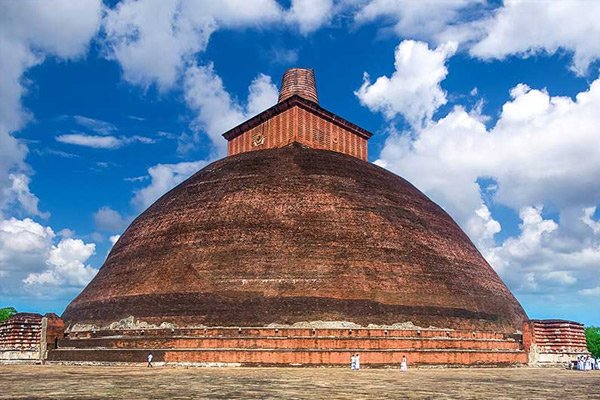 Thuparamaya is the first Buddhist temple in Sri Lanka. Located in the sacred area of Mahamewna park, the Thuparamaya Stupa is the earliest Dagoba to be constructed in the island, dating back to the reign of King Devanampiya Tissa. The temple has been formally recognised by the Government as an archaeological site in Sri Lanka. 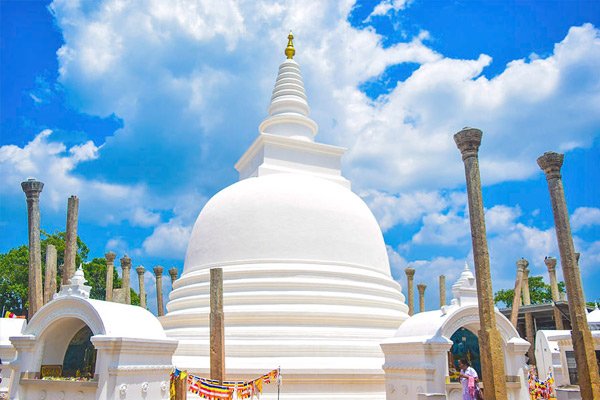 Abhayagiri Vihāra was a major monastery site of Mahayana, Theravada and Vajrayana Buddhism that was situated in Anuradhapura, Sri Lanka. It is one of the most extensive ruins in the world and one of the most sacred Buddhist pilgrimage cities in the nation. Historically it was a great monastic centre as well as a royal capital, with magnificent monasteries rising to many stories, roofed with gilt bronze or tiles of burnt clay glazed in brilliant colors. To the north of the city, encircled by great walls and containing elaborate bathing ponds, carved balustrades and moonstones, stood "Abhayagiri", one of seventeen such religious units in Anuradhapura and the largest of its five major viharas. One of the focal points of the complex is an ancient stupa, the Abhayagiri Dagaba. Surrounding the humped dagaba, Abhayagiri Vihara was a seat of the Northern Monastery, or Uttara Vihara and the original custodian of the Tooth relic in the island. The term "Abhayagiri Vihara" refers not only to the complex of monastic buildings, but also a fraternity of Buddhist monks, or Sangha, which maintained its own historical records, traditions and way of life 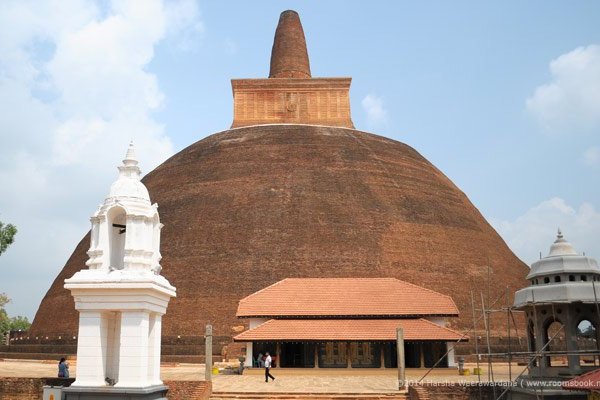 Isurumuniya is a Buddhist temple situated near to the Tissa Wewa in Anuradhapura, Sri Lanka. There are four carvings of special interest in this Vihara. They are the Isurumuniya Lovers, Elephant Pond and The Royal Family 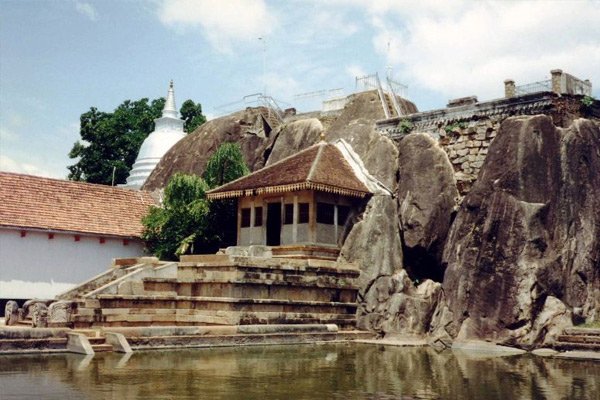 One of the best specimen of bathing tanks or pools in ancient Sri Lanka is the pair of pools known as Kuttam Pokuna (Twin Ponds/Pools). The said pair of pools were built by the Sinhalese in the ancient kingdom of Anuradhapura. These are considered one of the significant achievements in the field of hydrological engineering and outstanding architectural and artistic creations of the ancient Sinhalese. 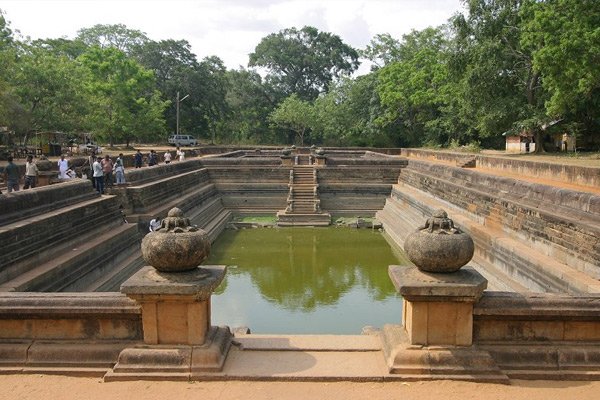 The Ruwanwelisaya is a stupa and a hemispherical structure containing relics, in Sri Lanka, considered sacred to many Buddhists all over the world. Two quarts or one Drona of the Gothama Buddha's relics are enshrined in the stupa, which is the largest collection of his relics anywhere. It was built by King Dutugemunu c. 140 B.C., who became King of all Sri Lanka after a war in which the Chola King Elāra was defeated. It is also known as "Mahathupa", "Swarnamali Chaitya", "Suvarnamali Mahaceti" and "Rathnamali Dagaba". This is one of the "Solosmasthana" and the "Atamasthana". The stupa is one of the world's tallest ancient monuments, standing at 103 m and with a circumference of 290 m. The original stupa had been about 55 m in height and was renovated by many kings.The Kaunghmudaw Pagoda in Sagaing, Myanmar is modelled after this stupa. The Mahavamsa contains a detailed account on the construction and the opening ceremony of the stupa. The stupa was a ruin in the 19th century. After fundraising efforts by a Sinhalese bhikkhu, it was renovated in the early 20th century 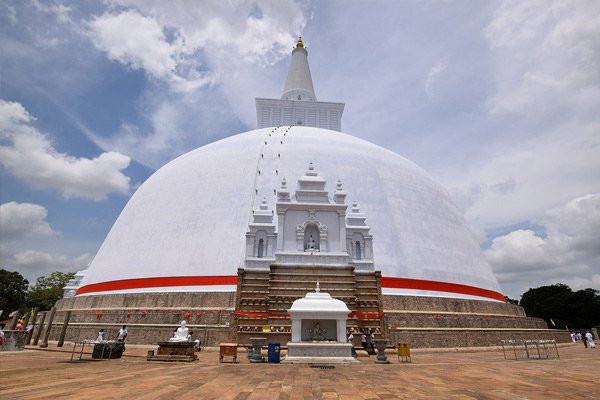 This sleepy village and temple complex, 13km east of Anuradhapura, holds a special place in the annals of Sri Lankan lore. In 247 BC King Devanampiya Tissa of Anuradhapura was hunting a stag on Mihintale Hill when he was approached by Mahinda, son of the great Indian Buddhist emperor, Ashoka. Mahinda tested the king’s wisdom and, considering him to be a worthy disciple, promptly converted the king on the spot. Mihintale has since been associated with the earliest introduction of Buddhism to Sri Lanka. 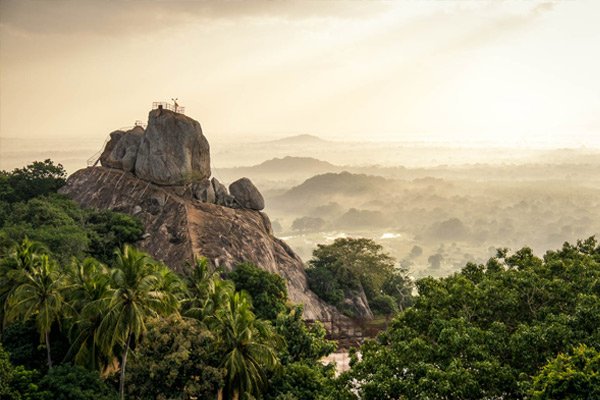 Jaya Sri Maha Bodhi is a Sacred Fig tree in the Mahamewna Gardens, Anuradhapura, Sri Lanka. It is said to be the right-wing branch from the historical Sri Maha Bodhi at Buddha Gaya in India under which Lord Buddha attained Enlightenment. It was planted in 249 BC, and is the oldest living human-planted tree in the world with a known planting date.Today it is one of the most sacred relics of the Buddhists in Sri Lanka and respected by Buddhists all over the world. In the 3rd century BC, it was brought to Sri Lanka by Sangamitta Theri (Pali; Skt.: Sanghamitra), the daughter of Emperor Asoka and founder of an order of Buddhist nuns in Sri Lanka. 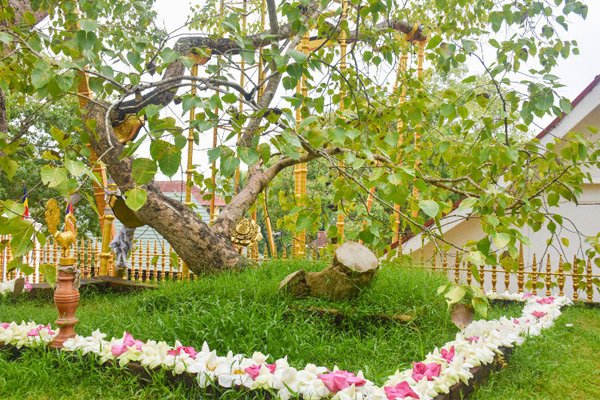